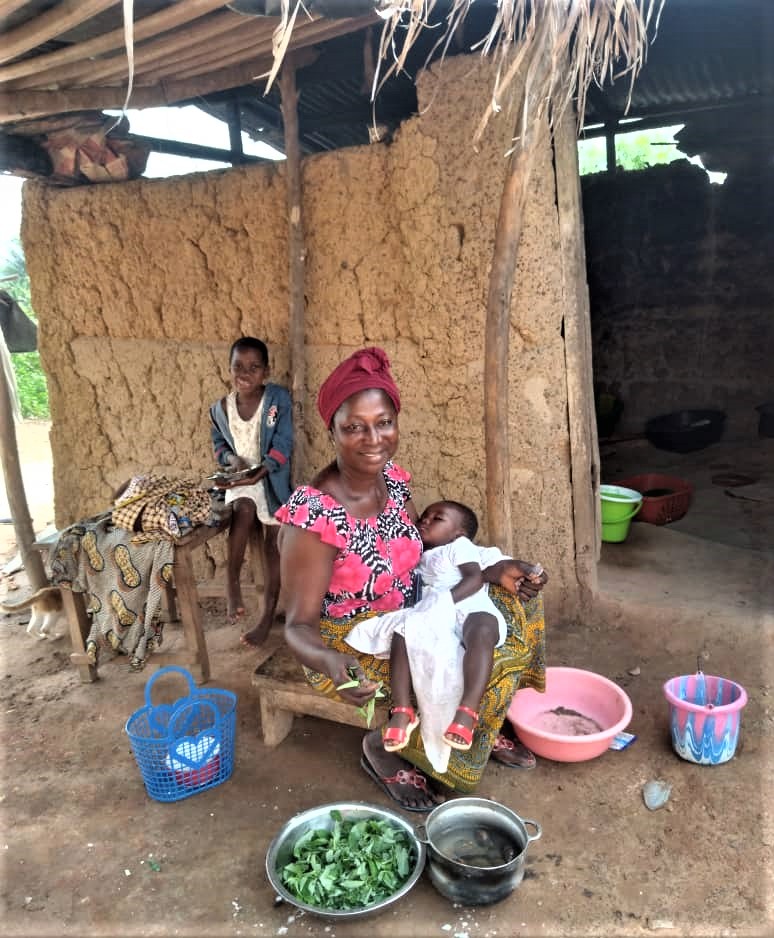 
As rays of sun beat down on the dry earth in Côte d’Ivoire, Tamia Assari Kossia holds a precious life against her chest. Her baby granddaughter wears a white dress that drapes past her legs as they sit in the shade outside their home.

Made of concrete and made of beaten earth, the house is owned by Tamia’s husband. Their shower and kitchen are made of clay, and can be found outside the house, which has wooden windows and doors.

“We have no television, no furniture, no tables to eat from,” says Tamia. Although there are just two beds in the house – one in her bedroom and the other in that of her husband’s second wife – Tamia has reason to smile broadly as her young granddaughter rests peacefully in her arms.

Tamia is the second woman in a polygamous household and lives with her granddaughter, her two nieces, her co-wife, and her eldest daughter. She also supports five of her children who board at the school in town. Although her eldest son sends money when he can, Tamia is ultimately responsible for all the expenses in her household, as her husband is unable to work.

“He has been ill for almost eight years,” Tamia explains. “He has a sight problem and therefore cannot work to meet the needs of his family.”

Each morning before 7 a.m., Tamia wakes up and rouses her children so they can go draw water from the well to fill the barrel. After taking her bath, she heats her husband’s water so he can bathe.

After preparing breakfast for her family, she heads to the market in Broudoukou-Penda, the village Tamia has lived in for almost 31 years. She buys the necessary items for her family’s meals.

And then she makes her way to the local bar and restaurant she has owned and managed for more than 20 years.

The Importance of Cocoa to Ivorians

Tamia’s business is a vital source of income, as the family’s annual cocoa production cannot support the daily needs of the household, especially with Tamia’s husband unable to work.

Cocoa is a key sector in the economy of Côte d’Ivoire, providing income to an estimated 1 million producers and supporting over 5 million individuals across the country. Côte d’Ivoire has ranked number one in global cocoa production for the last 30 years, and in 2018, Ivorian farmers produced roughly 2 million metric tons of cocoa, representing 40% of the country’s total exports.

However, despite the economic importance of the industry, the majority of the 1 million Ivorian smallholder cocoa farmers live below the poverty line. The problem is compounded by the fact that income is hard to come by during the cocoa off-season, roughly five months of the year.

When Tamia’s own health suffered two years ago, life became hard. In the first year, she had to stop carrying out her normal business activities in order to travel to the capital city of Abidjan with her eldest son and undergo medical treatment.

This meant her restaurant lost customers to competitors. “Having a sick husband who can no longer take care of his children? Be sick yourself and not be able to take care of your children either and no longer able to ensure their education? I saw myself dying in misery with a mortgaged future for my children,” says Tamia.

It was then that she learned of Project Awalé–through which she would eventually gain the tools to change her own life.

How TechnoServe Impacted Women and Youth in Côte D’Ivoire

“Awalé” is a phrase in the local Dida language that means unity and togetherness. In partnership with Cargill, TechnoServe began Project Awalé in order to increase and diversify the incomes of cocoa-farming households in the Loh-Djiboua region in southern Côte d’Ivoire.

The project works to help 1,400 people–at least 70% women and 50% are youth (ages 18-35)–from cocoa communities to create or expand non-cocoa income-generating activities, such as farming other high-value crops, cottage food processing, or non-agricultural microenterprises such as food stands, retail shops, salons, or tailors.

Tamia worked with TechnoServe trainers to learn. Soon, she regained her self-confidence and her ability to dream.

“Thanks to training and coaching on financial management, I really realized the importance of managing my daily expenses in order to stabilize my profits,” says Tamia. “I managed to make a difference in terms of managing finances and saved by reducing my expenses.”

At the end of the first training and coaching session, Tamia decided to fight for the revival of her restaurant. She had it repainted, repaired its sound equipment, and hired a young woman as a cook to replace Tamia herself, who is no longer able to prepare food due to her illness.

She can now pay the monthly tuition of her children on time, she says: “I fight the best I can to educate them.”

Tamia says her family is now more fulfilled: she can care for her husband’s medical needs, and  everyone in the household has enough to eat. She can also send more money to her children in town for their daily needs and education.

“Today, I am filled with hope thanks to the Awalé project,” she says.

A Woman Farmer and Single Mother Empowers Her Family, Her Community, and Herself %

5 Natural Ways to Cope With Stress and Anxiety