In South Africa, A Woman Entrepreneur Builds Bricks to Success % 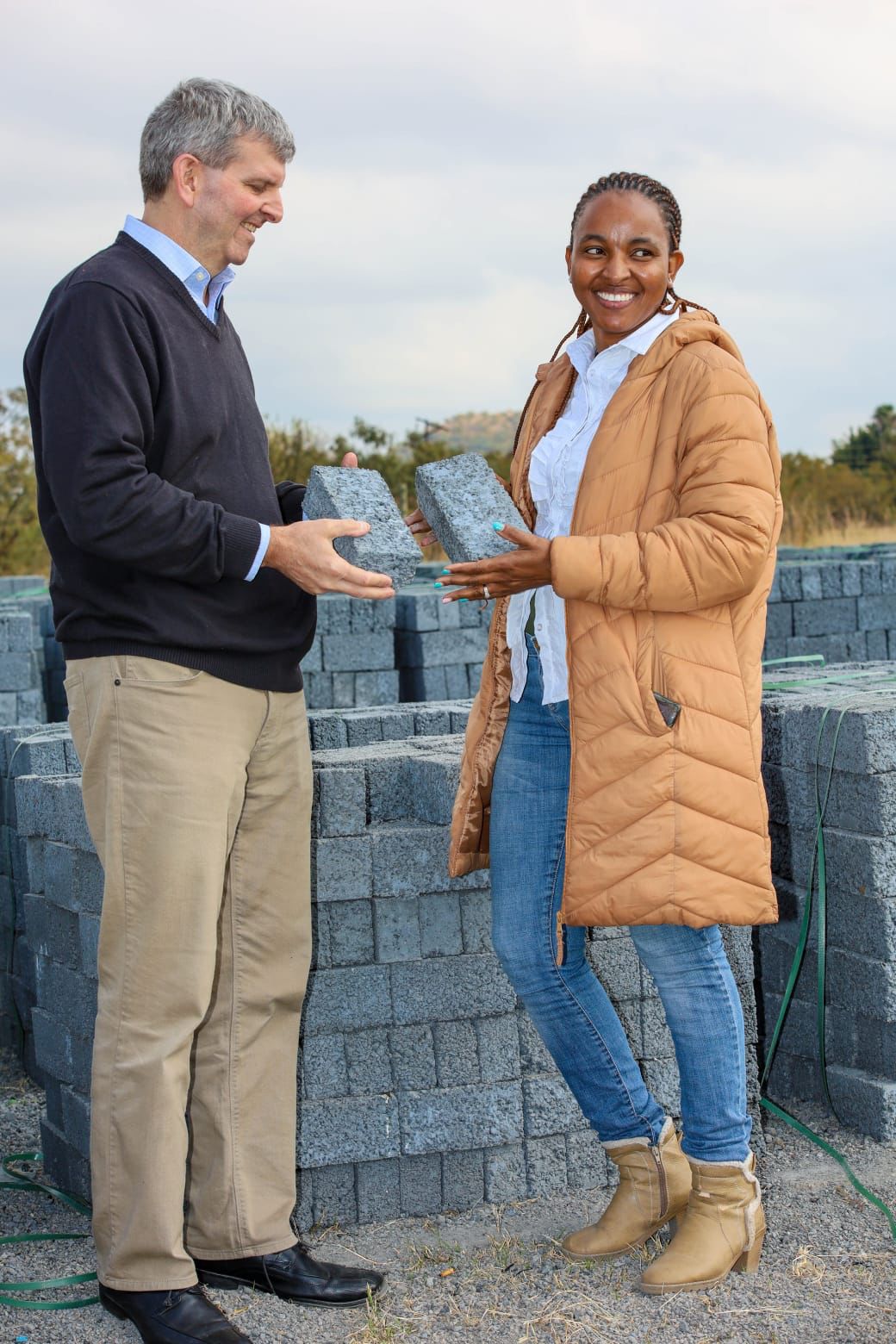 
As I walk through the work site in Rustenburg, South Africa, I gaze upon row after row of slate-colored bricks. This site is the business dream of Kgaogela Tumagole, the woman entrepreneur who founded this brick-making enterprise.

I hold one of the bricks that her company, Mmelegi Bricks, has created; it’s surprisingly lightweight in my hands. While listening to her story, it becomes clear that the weight of this brick doesn’t compare to the heavy weight that was on Kgaogela’s shoulders before she began working with a  TechnoServe business advisor.

Kgaogela trained as an accountant and was working as one when she decided to start her own business. She had seen lots of construction and renovation happening in and around her home in Rustenburg, the most populous city in the North West province of South Africa. She then decided to start Mmelegi Bricks, a brick-making business with the tagline, “An effort to remember a lifetime.”

However, the index also noted that while women entrepreneurs in South Africa are making strides to overcome gender-related biases and advance their businesses, they still face several structural and social obstacles. Many of these have been exacerbated by the pandemic.

As she began her business, Kgaogela struggled to manufacture profitably despite being correct about the demand for bricks. In short, her business was losing money.

Kgaogela enrolled in the Zimele program, an Anglo American-TechnoServe collaboration that supports entrepreneurs living in communities around Anglo American assets and workshops. The program provides enterprise development training to entrepreneurs and small business owners in response to South Africa’s national priority of reducing unemployment and poverty.

TechnoServe Business Advisor Zandisile Botman provided Kgaogela with the advice and know-how to get permission to access a certain type of ash that is a by-product of an Anglo American smelting operation in Rustenburg. For Anglo American, this was simply waste to be disposed of. But for a brick manufacturer, it was a game-changer.

Kgaogela got the ash for free. She just had to pick it up. So she replaced an expensive input in her brick-making process, dramatically lowering her cost. It also made her bricks lighter and stronger, making them more desirable in the local market and increasing their appeal.

“The ash that we are collecting from Anglo American has changed the life of Mmelegi Bricks,” says Kgaogela. “Now, we are seen as big competitors in the brick manufacturing industry.”

Why This Woman Entrepreneur’s Story Matters

Kgaogela’s story shows a lot about how our collaboration with Anglo American is helping ambitious people like her to achieve their business dreams and boost the local economy. And it shows how quality advice from a TechnoServe Business Advisor can make a big difference for the local business owners we support.

Today, Kgaogela’s business is now profitable; she has 14 employees; and demand for her bricks is outstripping her ability to supply. She has increased production hours to respond, but is also looking at other options to further increase her production capacity.

I particularly enjoyed this visit because one company’s waste turned out to be the key to a local entrepreneur’s business taking off–a great circular business model. This amazing “win-win” situation is all made possible by Anglo American’s Zimele project and the skilled TechnoServe Business Advisor who helped make it all happen.

Because of Kgaogela’s ingenuity, another woman entrepreneur is on the path to success. In a world where we need to reuse more resources and create more jobs, it’s stories like these that inspire me and give me hope.