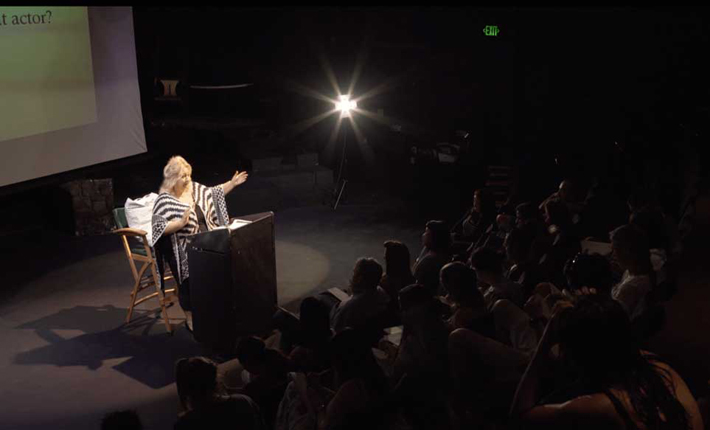 In this edition of Empowered Women Empower, join us for a peek inside the inspiring mind of Michelle Danner. Michelle is a performer, teacher, storyteller, entrepreneur, and expert. She is known for her legendary acting classes. And for her role as co-founder of the Creative Center for the Arts and the Los Angeles Acting Conservatory. She is also a well-established feature filmmaker. The founder of the independent film production company All In Films. And a dedicated mom of two teenage boys!

After three decades as an acting coach, making the transition to film director was “a natural progression of wanting to raise the bar in new work, and working with actors in a way that is very collaborative and in-depth,” explains Michelle. So, in 2019 she released the supernatural thriller “Bad Impulse” while preparing her next feature “The Runner” which premiered in 2021. Both films won multiple awards and showcased Michelle’s innate talent, and passion!, for storytelling.

In addition to her films, Michelle continues to run a weekly acting class and oversee the conservatory programs at the Los Angeles Acting School. All while being mom, “I continued that with my two boys – whenever I worked on a film, they’d come on the set with me, it was important I showed them the real value of that kind of work,” Michelle recalls. Oh and let’s not forget we are talking about COVID years!

Be Inspired by Michelle Danner!

Love Happens: As our name, and the tagline of our publisher KOKET denotes, at ‘Love Happens’ we are firm believers that you cannot achieve any level of success without love. When did your love affair with acting & film begin? And how did this make you feel?

Michelle Danner: My love affair with acting and film might have begun as I was hiding under my dad’s desk starting at 3 years old. He opened the very first William Morris Entertainment Agency in Paris, France and for the next decade, I was privy to all these performers, actors, and singers coming and meeting with him. I had a childhood very rich with art, we went to museums and the theater all the time. Sometimes I skipped classes to watch movies at the Champs-Elysees. It inspired me, fueled my imagination, and filled me with stories.

Lh: Tell us a bit about your path and what led to your decision to start the Creative Center for the Arts and the Los Angeles Acting Conservatory?

Michelle: I grew up watching theater in Paris and then New York and that changed my life. When I moved to Los Angeles in the early ‘90s, compared to Paris and the East Coast, there wasn’t a lot of theater here, so I very much wanted to do theater in LA and I still do. Of course, with the pandemic, it’s been halted a little bit.

I was lucky enough to study with Stella Adler and Uta Hagen at their conservatory programs when I was young and I think it’s important for aspiring actors to study the craft. To draw upon the Stanislavski, Meisner, Method, Stella Adler, and Uta Hagen techniques and develop a comprehensive set of acting tools is the mission of the Los Angeles Acting Conservatory. People come and study with us from all over the world and they get to take these well-rounded programs. There are 2 quotes painted on the facade of our building on Washington Blvd: “You can’t spell heart without art” and “You can’t make art without heart”. This very much embodies the spirit of what our theater and school are about.

Lh: What empowers you?

Michelle: Every day when I get up I feel a desire to tell stories. The love of my family and my children are a constant source of empowerment.

Lh: Tell us about the biggest hurdle you have overcome in life or business?

Michelle: There is never enough time. Time is a very precious resource. In order to have a business to direct, to produce, you have to be responsible. There are always a lot of aspects you have to tackle and you don’t always want to do it, but that’s part of being a grown-up, isn’t it?

Lh: Who is Michelle Danner the Woman?

Michelle: Someone who has the capacity to love and nurture.

Michelle: Somebody who has the capacity to tell stories. Michelle Danner the teacher is someone who feels she has the responsibility to pass it down, to share with the next generation of actors the knowledge she has as much as she can. The film director is someone who wants to tell stories that have a powerful message in them.

Lh: How do you empower others?

Michelle: I try to show people that it is possible to achieve anything that you set your mind to. It’s the way you think about what you can achieve that makes the difference.

Lh: What three pieces of advice would you give to someone starting their career in the film industry?

Michelle: I would say: learn the craft, read a lot, and listen to all different points of views.

Lh: Do you have any mottos you like to live by?

Michelle: I live by the fact that you have to wake up every day and find a way to be proactive. If you are doing the thing you love, it will drive you. Get it done!

Lh: What’s next for Michelle Danner?

Michelle: I’m going to be filming a couple of movies back to back, a wonderful romantic comedy, and a powerful drama. I’m also filming Anne Archer for virtual theater in “A Ticket to the Circus” about the life of Norris Church Mailer. I’m looking forward to all these things in 2022.

Visit Michelle Danner at michelledanner.com (and if you are an aspiring actor check out her online acting classes!)

Captured On Film With Assouline