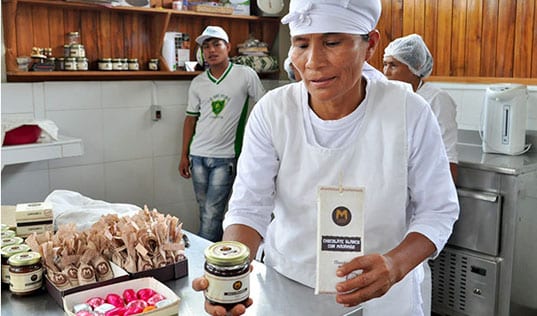 Step into the processing plant where the Mishky Cacao Producers Association makes its chocolates and you’ll find 12 women who have transformed their community – the small town of Chazuta in Peru’s San Martín region.

Peru is one of the world’s leading producers of cocaine, and until recently, the farms around Chazuta were dedicated to growing coca leaves – the raw material for the drug. Narcotrafficking, and the violence that came with it, dominated the community.

“Back then, there was nothing to do but cry and stay locked up in our houses. There was fear, terror from the violence,” says Ayli Quinteros, leader of Mishky Cacao. Community members despaired over their children’s future, too. “They didn’t want to study. They saw easy money in coca,” she recalls.

A Slow but Steady Change

With support from the U.S. Agency for International Development (USAID), community members began to swap their coca plants for new cocoa trees. But those transition years were difficult ones, and farming families struggled to match the profits they had made from coca leaves. But still, growing cocoa and manufacturing chocolate turned out to be a safer alternative for the smallholder farmers and a mechanism to spur economic growth, which has improved the quality of life for the women, their families, and the community.

Mishky Cacao was born when Ayli and other women from the community decided to generate more value from their families’ cocoa harvests by producing chocolate together. Then, TechnoServe began working with the twelve members of Mishky to improve their production, marketing, and sales.

Thanks to the advising, training, and capacity building, Mishky’s productivity has vastly improved. In its first year, Mishky made $2,700. Now, Mishky earns that amount every month.  With their earnings, the women have invested in upgrading the cocoa processing plant in their community.

“We’ve seen a great change in our city and in our homes,” says Ayli. “The men value and respect the women now because we are contributing to the household income, and the women have more opportunities to participate.”

Women are key to driving change in vulnerable communities. When women are seen as valuable partners and strong leaders with a voice, communities can create transformative change and sustainable economic growth.

Success Beyond What They Thought was Possible

TechnoServe’s support of Mishky is part of The Economic Development Alliance in San Martín. Over the last few years, the Peruvian government has worked to establish a stronger system for implementing alternative products such as cocoa.

The women-led business has managed to promote its cocoa production at a regional, national, and global level. In 2014, Ayli represented the association at the Le Salon du Chocolat in Paris, receiving the award for “Special Merit in the Americas.” Today, Mishky has been recognized internationally for its innovative chocolate products.

Ayli has seen a change in her own family, too. Her husband now sells the extra cocoa beans that Mishky doesn’t need, her son started a youth group that markets jams and handicrafts, and her daughter grows cocoa on her own small farm. Ayli says, “The local economy and our community have changed and everyone laughs, sings and is free to enjoy.”